"Innovation: France joins the world's top 10 and ahead of the United States
June 15, 2017 - Martin BUREAU / AFP
Read the article from magazine here

France is benefiting from a sharp rise in productivity but is seeing the number of its researchers dedicated to new technologies decrease.

It's a first. According to an annual ranking by Bloomberg, the United States is no longer in the top 10 in the world of innovation and slip from 9th to 11th place. France is going the opposite way and thus passes from the 11th to the 9th place. On the podium, South Korea and Sweden remain respectively on the first and second step, ahead of Singapore, which gains three places.

To establish this ranking 2017, each country was given a score on 100 by Bloomberg which is based on seven criteria: expenditures for innovations related to GDP, value added manufacturing, the number of companies working in the high technologies, the productivity of scientific discoveries, the dynamism of the tertiary sector, the number of researchers compared to the population and the number of patents filed.

France must above all its entry into the top 10 to a strong increase in productivity (+4 places compared to 2016).
France nevertheless sees the number of its researchers dedicated to innovation decrease (-3 places).

For their part, the United States was mainly penalized by its lack of dynamism in the tertiary sector, and particularly in the university education of scientists and engineers. Value creation is also declining, but the world's largest economy remains the one with the most high-tech companies.

And the situation should not improve across the Atlantic, according to Robert Atkinson, president of the Information Technology & Innovation Foundation. He notes that "other nations have responded by pursuing smart, well-funded innovation policies, with particular emphasis on technology commercialization initiatives." 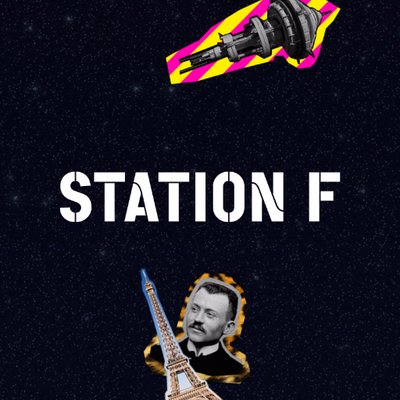 HAPPY BIRTHDAY!!
Read the article from Innovators magazine here
The world’s largest startup campus celebrated its first big fat birthday party earlier this week.
Station F, located in Paris, reknowed for its refreshingly innovative approach to shaking up stale startup practices, with its programmes that promise no bullshit mentors and support people from backgrounds traditionally left out of this ecosystem.
So if you’re an ambitious early stage company, check out how you can be part of Station F

The initiative of the French Embassy opens the way for the cooperation of innovative companies and institutions from both countries
Wednesday, June 27, 2018 12:11

Innovation is another link between France and Greece. In this context, the Mazinnov initiative opens the way for cooperation between innovative Greek companies and French operators to network and support them.

Already the first round of the Forum, which took place a few months ago, gave the opportunity to meet more than 120 Greek and French public and private stakeholders in two promising areas: energy and the environment on the one hand and innovation in all its forms on the other.

These meetings helped to lay the foundations for the creation of permanent and dynamic links with the organization of more than 75 business meetings and the signing by 120 participants of a Charter for a Greek-French innovation network.

As the Mazinnov program initiators, proud supporters of new entrepreneurship, the Mazinnov program has many more plans for the coming autumn and for 2019. The French-French cooperation on innovation and the promotion of start-ups is one of its priorities "A Strategic Partnership for the Future" signed on 23 October 2015 by former French President Francois Holland and Greek Prime Minister Alexis Tsipras.

For Greece and the Europe of the future

The Greek-French innovation network Mazinnov is an initiative of the Embassy of France in Greece to implement this initiative.

It also states that Greece has many new talent, whose dynamism is key to the sustainable re-launch of the Greek economy and Greek society. It started in Athens a year ago but after the development of close relations between participants, it was decided to create an innovation network between the two countries with hundreds of founding members. The Mazinnov network aims to bring French and Greek ecosystems closer together on the basis of an integrated approach, from applied research to the emergence of start-ups. It has been developed around two forums, several meetings and many collaborations. Mazinnov's goal is to become an autonomous, vibrant organization of innovation and co-operation between the two ecosystems where influential entrepreneurs, science, arts, education and small children will be able to "imagine" Greece and Europe of the future.

There are many sources of funding for Greek startups: European funding (from Greek private banks), national or international competitions, co-financing platforms, business angels. Mazinnov as a Greek-French network and not yet another incubator in Greece brings in contact, informs about existing opportunities, supports startups selected in a competition in France to travel there, student exchanges, partnerships. Many factors of innovation have already benefited:

Partnerships
The partnerships that the Mazinnov network has reached so far are as follows:
-  Collaborate with Mindspace Bootcamp in Athens throughout the year 2018.
-  Participation in the mentoring program of the National Bank of Greece "NBG Business Seeds à OkThess!" In Thessaloniki.
-  Sponsoring and sponsoring the call for applications for the AromaHub innovation contest, the Patras Science Park
-  Collaboration with Mindspace in Athens and participation in "FuckUpNight"
-  In the framework of the "StartupEurope Week", a partnership with the Youth Entrepreneurship Club, all over Crete.
-  Partnering with ThinkBiz in Athens for "ThinkBizAcademy"
-  Collaboration with ActInSpace, for Corallia.
-  Partnership with the International Summer School - International SummerSchool on "Artificial Intelligence and Games".
-  Collaboration with Crowdpolicy and participation in Crowdhackathon "Smart City 2" at the SNFCC.

The forums and meetings Mazinnov :

-  November 25, 2016: This first meeting brought together more than 80 Greek and French innovation actors who discovered each other, more than 500 visitors, and launched the Mazinnov initiative with more than 130 network entries. Lively and sustainable partnerships have been created.
-  10 and 11 November 2017: These two days welcomed more than 2,000 visitors and 15,000 streaming viewers (smart cities, lean startups ...) as well as several platforms and calls for applications: The art and business platform, based on the " Ecole des réalisateurs "by Fabrice Hyber, whose aim is to help artists express their creations, who chose four projects of young Greeks. The "Imagine the Greece of tomorrow" platform, which has given us the opportunity not only to distinguish the most innovative plans for the future (based on specific themes: agriculture, tourism, finance ...) through a contest in the form of piecing, but also to give it for young Greeks (8-12 years old) to express their vision for tomorrow's Greece. The "Adopt a startup" platform, which enabled the "adoption" of 20 startups by one or more companies for technical advice (business model, contact network ...). The results of the adoptions will be announced next fall.
-   March 8, 2018: Cocktail for the International Women's Day dedicated to Greek women. The cocktail gave the opportunity to more than 100 female celebrities in the field of innovation to meet each other or to meet for some of them.
-   March 19: In the framework of the "Goet de France", the best Parisian spaghetti with a Greek flavor.
-   June 18, 2018: Creation of a Greek startups link with Atout France tourist agency.
-   June 22, 2018: Creating a greek startup link with the Energy Observator initiative, the first ship that only moves with renewable energy and hydrogen and makes the round of the world.

France is already one of Europe's most important centers for start-ups. He comes second in Europe after the UK to invest in this sector and has secured support for technology giants such as Facebook and Amazon. Microsoft has chosen it as the seat of its new program for new artificial intelligence businesses. At the same time, the French government supports the development of French businesses in foreign cities and promotes French entrepreneurs in large business conferences. It strives to attract talent from all over the world by providing short-term visa procedures to businesses and their families by providing a special tax regime to new innovative businesses.

Protothema: "French Ambassador: France is working with Greece to exit the crisis"

"France does not just support Greece's efforts," said Christophe Chantepy, who presented the aims and actions of the 2nd Forum Mazzinov to be held in Technopolis in Gazi in the weekend of November 10-11. - In the Forum the Greek meets the French innovation "The Parthenon is the symbol of innovation."

Huffington post: "Mazinnov, the Innovation Forum of the French Embassy in Athens"

Would you like:
- To meet the best French and Greek innovators?
- Learn how dozens of start-ups can be adopted by larger companies?
- Listen to decades of innovative ideas?
- Imagine tomorrow's Greece?